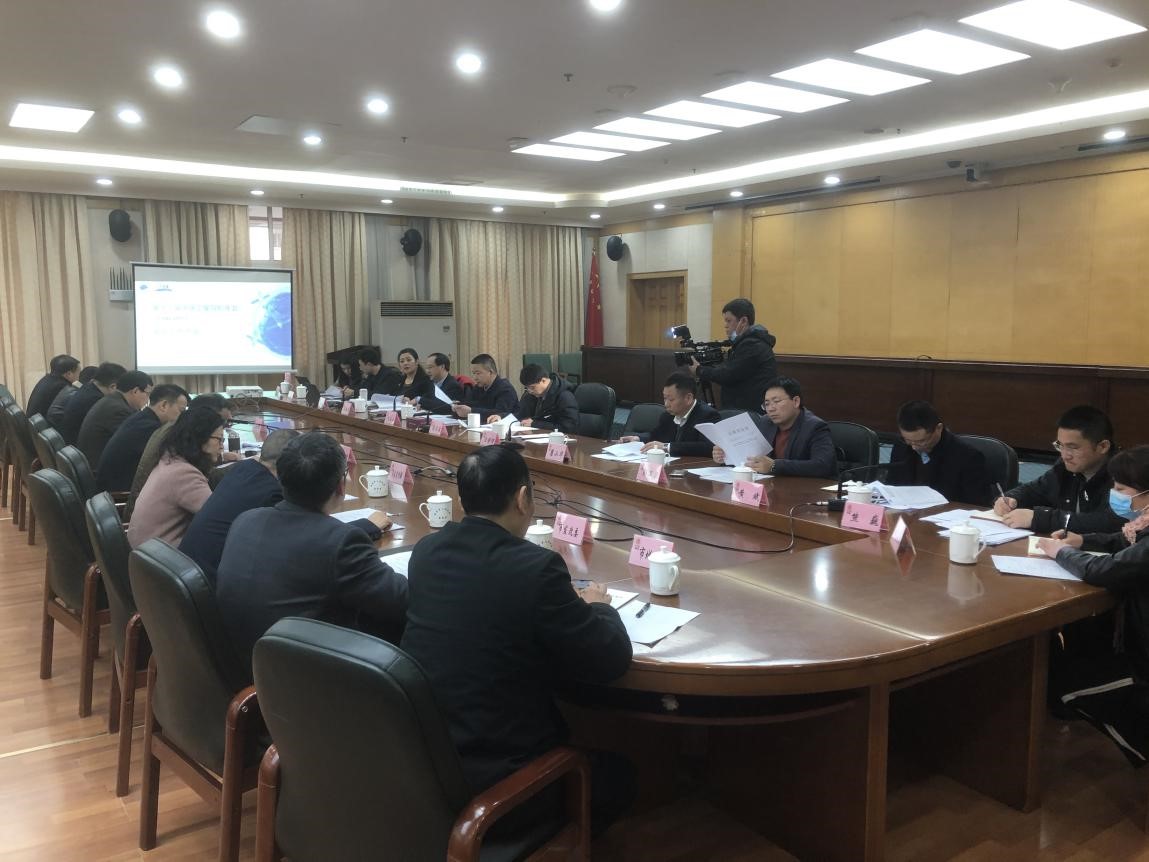 The meeting heard reports on the overall and local preparations for this year's CSNC by the Academic Exchange Center of China Satellite Navigation Office and the Office of the Committee for Civil-military Integration Development, Jiangxi Provincial Party Committee of CPC，and the Office of the Committee for Civil-military Integration Development, Nanchang Municipal Party Committee of CPC. The meeting discussed, coordinated, and eventually reached agreements on issues like the changes of the members of the Organizing Committee of the 12th CSNC, the opening ceremony of the Annual Conference, the layout of the China Satellite Navigation Expo (CSNE), the press conference, the agreement signing ceremony, and the arrangement of local events and activities.

Executive Vice Mayor Yang Wenbin mentioned that the Beidou Satellite Navigation System was an important tool for our country and the China Satellite Navigation Annual Conference is the world's top navigation science event and was of great significance in promoting the development of China's satellite navigation industry and assisting the development of BeiDou industry. It was the common wish of all parties to organize a high-standard CSNC. Nanchang city would utilize the strength of the whole city to prepare for the Annual Conference and to "be a good host, introduce good projects, and build good image". Nanchang would strive to complete its plan scheme, standardizing system, responsibility system and guarantee system, to set up special teams, solidly promote the preparation work for the Annual Conference, and to make concerted efforts to present a grand satellite navigation exchange event with Nanchang's characteristics.

Executive Deputy Director Tu Qiongli expressed that the Provincial Party Committee and People's Government of Jiangxi highly valued the undertaking of the 12th China Satellite Navigation Annual Conference. Regarding this, the Secretary of the Provincial Party Committee and the Governor of Jiangxi Province had given important instructions on many occasions, and had listed it as a key task in the Provincial Party Committee's work plan and the Provincial Government's work report. Tu Qiongli pointed out that three "highs", three "goods" and five "in-places" shall be achieved in undertaking the Annual Conference. The three highs were "high leadership level, high expert level, and high enterprise level"; the three goods were "good atmosphere, good arrangement, and good industrial connection"; while the five in-places were "planning in place, special teams in place, scheme in place, mobilization in place, and responsibility in place. Nanchang has been striving to ensure the undertaking of the 12th Annual Conference demonstrates the level, effectiveness, and highlights of Jiangxi and Nanchang.

Deputy Director Chen Gucang said that this meeting is of great significance, for it indicates that the preparatory work for CSNC has entered the stage of full implementation. Next, with full support and cooperation of relevant authorities of Jiangxi Province and Nanchang City, the Organizing Committee of CSNC shall solidly promote the preparatory work of the Conference. The first task is to confirm the plans as soon as possible to draw up a list of pending items one by one before the second plenary meeting in late April. The second task was to establish a normalized tripartite working mechanism, strengthen communication and cooperation, ensure smooth information flow, and to promote the preparation of the Conference in an efficient way. The third was to make detailed work plans early, carefully, and thoroughly. We endeavored to make this Conference more successful, wonderful and unforgettable than all previous ones, and to present it as a gift to the CPC to commemorate its 100th anniversary!

The 12th China Satellite Navigation Conference (CSNC2021) will be held in Nanchang Greenland International Expo Center, China, on 26-28 May 2021. The theme of this Annual Conference is "Spatial-Temporal Data Empowers Bright Future". The Conference will cover contents include summit forums, academic exchange, Navigation Expo, high-level forums, and public education activities. Sci-tech workers as well as people from all walks of life at home and abroad are welcome to participate.